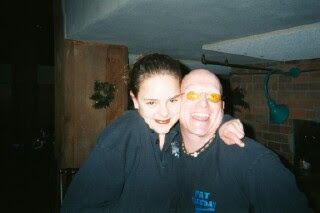 Today's photo was taken back in 1999. John "Woody" Wood was a great friend of mine. We both shared the same birthday, although he was seven years older than me, he acted several years younger than me. He was one of a few musicians who I could truly call my brother. We both had family from the same small Warren County town of Milo, Iowa, and we joked about playing in Milo back in the 1960s. Woody as you can see was a ladies man, and he never had problems finding new girls, even after he was married:-) He also had a wonderlust that was never cured. He always was leaving Des Moines for greener pastures, and yet we could always count on his return like Spring following Winter. In fact, the last time he left many of us pretended to take bets on his return. Sadly, his last trip would never find his way back to Iowa. He left for California and started a band called Too Many Bad Habits. Over a three year period he returned to visit, but he always went back to California. Unfortunately he got sick with Cancer and through a short but valiant struggle he died in Texas seeking an elusive cure.
I think what I miss the most about Woody was his calming ability. Our band was a basketcase, and Woody was the sane one. He was the glue that held us together, and the fact that we lasted as long as we did is testament to his good humor. I can recall a few out of town gigs, that I felt sick and tired, both physically, and with the band, and wanting to quit before we left town, but Woody could get me to reconsider, and by the end of the night I would be ready to play five more gigs. I think that Woody could put things in perspective since he had faced things that would floor most people. When he was young he had incredible long hair. Then almost over night it was gone due to Alopecia. I am having trouble accepting thinning hair on the top of my head, but think about being in your mid 20s, and having no hair. What was amazing about him, is he was so cool with it, and accepting of it. In fact, the women loved it too.
Its on days like these where I miss Woody, Jimmy, and Chicago Rick. They were good friends who left far too soon. They were family to me, and to a lot of the blues musicians in town. They are people that you can't replace, and are hard to forget even a year later.
I hope that in the next few weeks to highlight some of the local blues guys who have left in the last few years, so that their memories can remain in cyberspace as long as this blog goes on.
Posted by Blues Historian at 9:54 PM

Email ThisBlogThis!Share to TwitterShare to FacebookShare to Pinterest
Labels: John Woody Wood, Photo of the Week