Posted by Blues Historian at 10:51 PM No comments: 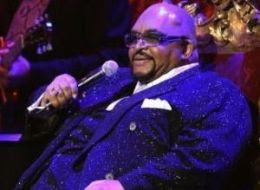 The king of soul Solomon Burke has died while on flight to Amsterdam to play a gig.  Burke was an amazing singer who never really got his due, but people who are into the blues and soul certainly knew about his greatness.  No doubt, I will update this post as more news come in.  Here is an obit from the Huffington Post.

October 10, 2010
This sad news comes to us from Ben The Harpman from his excellent Juke Joint Soul newsletter. We quote Ben's obit:
Solomon Burke, the legendary 60s R&B/Soul singer and hitmaker has died at the age of 70 in the Netherlands. He was 70.
Burke was found dead on a plane en route from his home in Los Angeles to the Netherlands where he was scheduled to perform on Tuesday. No cause of death has been determined as an autopsy is set to be performed. Funeral arrangements are pending.
Burke was born in Philadelphia, Pennsylvania and began his life in the pulpit. He hosted a gospel radio show on-air in the City of Brotherly Love and met fellow Baptist minister Martin Luther King, Jr. several times. After having a minor gospel hit on the Apollo label, Burke was snatched up by Atlantic Records in 1960 and by 1961 had his first R&B Chart success with the country standard "Just Out of Reach (Of My Two Empty Arms)." Burke, who had grown up listening to the Grand Ole Opry, became known for blending his R&B and Soul tinges with country & western, which many say opened the door for Ray Charles' later success in the same vein. Between 1961-1964, Burke was one of the driving forces at Atlantic with six Top 10 R&B hits, with four crossing over into Top 40 Pop - “Just Out Of Reach (Of My Two Empty Arms),” “Cry To Me,” “Got To Get You Off Of My Mind,” “You’re Good For Me,” (penned by Don Covay), “Tonight’s The Night” and “If You Need Me” (written by Wilson Pickett). After the mid-60s, Burke's hit making waned but he continued to record vigorously.
Burke worked in obscurity throughout much of the 70s through the 90s. However, he saw an interest return in his career in the 80s when the soul comedy act The Blues Brothers covered his soul standard "Everybody Needs Somebody To Love" for their hit movie. Later on in the 80s, the late Patrick Swayze would seduce the character Baby (played by Jennifer Grey) to Burke's "Cry To Me" in the blockbuster romance Dirty Dancing. Again, Burke's success would be short-lived and he would return to both touring, recording, and even running a mortuary in his new home of Los Angeles. In 2001, Burke would be inducted into the Rock & Roll Hall of Fame and in 2002 win his first Grammy Award for Best Contemporary Blues Recording Don't Give Up On Me on Fat Possum Records. This revival would once again see Burke headlining shows across the country in mostly blues arenas. Burke enjoyed a special relationship with the Catholic Church throughout his life and in 2000, he and his family were invited to perform at the Jubilee of the Family at the Vatican. Since then, he has been invited back to the Vatican for it's Christmas celebration.
The last few years saw Burke checkered across the world on star-studded lists performing on national late-night talks shows to appearing at Jerry Lee Lewis' "Last Man Standing" Concert in 2006. Burke also graced #55 on the Country Charts in September 2006 for his recording Nashville, which returned him to his country roots. He also honored Ahmet Ertegun by co-hosting the March 2007 celebration of the Atlantic founder’s life at Lincoln Center, participating in the American Master’s documentary “Atlantic Records: The House That Ahmet Built” and in December of that year, performing at the private after-party of the Led Zeppelin reunion concert along with Ben E. King, Percy Sledge and Sam Moore. Earlier in 2009, Burke joined famed R&B producer Willie Mitchell at Mitchell’s Royal Studio in Memphis to work together on a new recording, marking the first time the two ever worked together. Mitchell would pass only a short time later. In May of this year, Burke toured Japan for the first time.
Though these are only a small list of his many musical achievements, Burke always was quoted as saying his greatest achievement was his large family of 21 children, 90 grandchildren, and 19 great grandchildren. They all survive. Burke had one more musical achievement to go, which now will be released posthumously. Set to be released later this month, Burke went in the studio with Dutch rockband De Dijk and performed their songs in English with them. It would have been his second album to come out this year.
If you would like more information on Burke, his music, and his career; click here.
Juke Joint Soul will have more information on arrangements, etc. as they become available.
- Posted By Ben the Harpman to Juke Joint Soul at 10/10/2010 04:43:00 AM
Posted by Blues Historian at 4:33 PM No comments: