Posted by Blues Historian at 8:06 PM No comments: 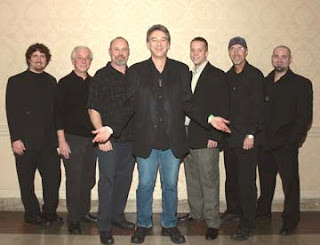 WARNING: Standing on a ladder for hours a day is NOT good for people with chronic bad back problems! This week's fantastic weather inspired me to completely clean out every gutter on my house and garage, (some of those gutters had not been cleaned in at least 10 years) and every gutter now has a "topper" (snapped in place every 3 feet) This project took three days, FOUR trips to Menards, and borrowing a 24' extension ladder from my neighbor. It was the classic example of Dorr's Law (everything will take longer and cost more than originally expected) Hopefully it will make a difference when it comes to ice jams on the roof this winter... The Blue Band turns PINK this Saturday evening, joining in an effort by Bikestock Iowa to help raise money for breast cancer treatment services for women who cannot afford medical services. We are one of five bands playing at Hawkeye Downs Fairgrounds/Race Track in Cedar Rapids. Entertainment starts at noon, we are the fourth band, 6-8pm. This is also a state-wide bicycle event with riders circling the race track for 24 hours. Admission is only $10 with proceeds to help find a cure and fund treatment. Be part of the cure. Find out more about this cool event at: http://www.bikestockiowa.com/index.cfm
A week from today (Fri. Oct. 14) starts the new season of Geeeezer Gigs at The Hub, Bub. Remember, it's the SECOND Friday of the month, Oct.-May, 4th & Main, Sparkle City USA. Pizza by the slice, adult beverages, reunion like atmosphere with Geeezers of all ages, great dance floor and still home by the 10 o'clock news. What's not to like, right Avis? Someone should bring CAKE to help kick off the series...
And next Sat. (Oct. 15) marks our return to that cool little club (The 503) in that cool little town (Iowa Falls) we play 9-mid...
The bad news is that we have NO work for the three weeks after that. Ouch. It was going so well there for awhile! Make us an offer for that Haunted House Halloween Party in yer dungeon, errr, I mean, basement. We've got lots of open weekends for Holiday parties also. Book the band info: http://www.theblueband.com/contactBob.htm We're totally open to offers outside of the normal pricing structure. Please help spread the word that we need work...
There has been a change in the New Bo Fundraiser that we've been part of the last couple of years. The New Bo Group (people that have organized to try and revitalize the New Bohemian neighborhood in Cedar Rapids after the 2008 flood) has somehow secured a license to operate a low power radio station in downtown CR. This year's fundraiser stands to educate Cedar Rapidians to the idea of a community radio station and raise money to equip the facility. The fundraiser is still the day after Thanksgiving, but has been moved to Parlor City Nightclub and will have Geeezer Gig hours! (3-7pm) Please make these changes to your calendar (the date had been previously scheduled for Gatherings in CR, 8-11pm)...
I have to admit that, despite the lack of income, I've really enjoyed the time off during the last two weeks (ok, I'm not enjoying the back pain from the gutter job) the weather has been spectacular (I hope there's no "paybacks" come December/January) and the Fall colors are really making Sparkle City shine. In the slow weeks to come, I have a number of soul searching questions that I'm hoping you can help me with. Since most of the people on this list are facing aging/career questions and choices that none of us ever dreamed we'd face, I'd love to get your perspective on these issues...
See ya on the PINK Highway, rub yer washboard tie to the tune of We're All In This Together, Strawberry shortCAKE with PINK frosting would be an ideal treat for this week, and no matter what shade of pink or blue you may be, always know that we love you. Bob Dorr & The Blue Band
Posted by Blues Historian at 8:03 PM No comments: