Blues News from The Voice

Forward email
Posted by Blues Historian at 10:20 PM No comments: 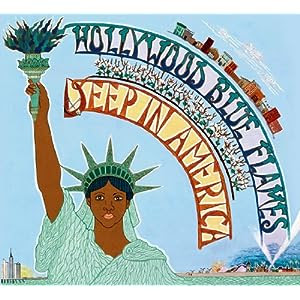 D
Long time blues fans will know the legendary Hollywood Fats, guitar player extraordinaire from California that died way to young.  Fats band is still playing as The Hollywood Blue Flames and have a double CD out called Deep In America, with the first cd is a second disk called Larger Than Life Vol. 2. The Hollywood Blue Flames still have that good old jump blues vib going that blues purists around the US still love.  Nothing really new here, on Deep In America, but when you have a good thing why screw with it.  Perhaps the gem, and unfortunately the let down is the live disk Larger Than Life Vol. 2.  It is a gem because it perfectly captures the time.  It was an amazing time where blues started to make its big comeback from the disco hangover of the 70s. On this disc Fats, and the band cover some of the classic covers, like She's Dynamite, Hide Away, Kansas City, Lonesome, and many more. I love the second disc, and it would be my favorite, except you can barely hear Hollywood Fats, and he is the guy  I want to hear.  First, it is still an important historical CD recorded at three separate locations between 1979-1980. While track three is recorded by a hand held recorder, (I am assuming a cassette recorder back in 79)  The others sound like board tracks.  This is where you record off the sound system.  What is good about recording of the sound board, is that the vocals, keys, and drums are clear, but the guitar is usually buried.  The reason for this is that the stage volume of the guitar is so loud that the sound engineer will turn off the microphone to the guitar.  When that happens, which is darn near all the time, then the guitar gets buried in the mix, and unfortunately this gem of a disc suffers from Hollywood Fats guitar buried for most of the CD. Yet, I wouldn't let you deter you from this double CD.  It is a good collection of jump blues, a cool double cd of old and new, and a nice historical recording of one of the many golden ages of the blues.
Posted by Blues Historian at 10:42 PM No comments:

I just recieved an email from a very proud dad. Iowa boogie woogie piano prodigy Chase Garrett has a huge gig coming up in November.  Probably too early to tell you so I will repost this in early November.  Check out  Chase's website as well. Email below:

I just wanted to pass along that Chase will be performing a Boogie Woogie piano show at the Englert theater in Iowa City on November 12 this year. Back to Back grand pianos on stage, it will be a boogie blowout!
His show will include Ricky Nye from Cincinnati, Bob Seely from Detroit, and Lluis Coloma from Spain.
www.myspace.com/bluesician88
www.cdbaby.com/cd/chasegarrett
http://www.facebook.com/pages/Chase-Garrett-Blues-Boogie-Woogie-Piano/269427453404
Posted by Blues Historian at 9:00 PM No comments:

Schedule of acts below
or see attachments...

Onyx2 playing between acts.jpg
Posted by Blues Historian at 1:24 PM No comments:

Amanda Zelina guitarist, and vocalist for the band The Coppertone has a new CD coming out called Hidden Dreams.  I have a video below of one of her songs.The song is blues rock, but I did notice on her myspace page that she does do some acoustic blues as well.

Blues On The North Shore

Posted by Blues Historian at 8:57 PM No comments:

LOCAL ARTIST BLUES BENEFIT GALAFayetteville's Elite performers in another memorable show of World Class Entertainment:When: Sat. June 26th 2010 from 8.30 PM - 1.30 AMWhere: The new Rockshop Music Hall 218 King Street off Eastern Blvd. Performers:Robbie Reid Band      Corky JonesBradley Muffett          Puncho ForrestChris Cox Band         David " Thumbs" JohnsonWillie Bradley            BluesEnigmaClaudia Swartz          Ray Kingand introducing 13 year old Blues Phenomenon " Lakota John" and the Locklear Blues Familyand other special guestsFor the first time ever Fayetteville's local Blues performers will play on a big stage and hopefully for a lot of people. I need you all's help to spread the word about this worthy cause event. Recipients of a newly established trust fund for disabled local Musicians are:Chris Cox, Pat Vines, David " Thumbs" Johnson, Jerry B. and others in the future. Funds will be strictly used to cover medical and living expenses in time of need. Tickets: $10.00 available at Edwards Music Company Mc Pherson Church Rd. in Fayetteville, $ 12.00 at the door.Info: Blueslover51@yahoo.comwww.facebook.com/claudiaswartzwww.myspace.com/BluesenigmaPlease come out for this awesome spectacle and the hottest Blues east of the Mississippi!See you all at the show?

Posted by Blues Historian at 8:53 PM No comments: