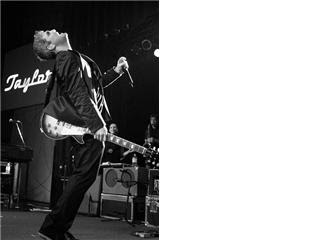 There are two versions of this song, and I chose the interview one, because I think that those of us who thought originally he was just another American idol, get an opportunity to hear his history, and how he paid his dues. I hate to sound like a broken record, but anyone who played the Chitlin Circuit it the real deal in my book. This song was written by Bryan Adams, for Ray Charles. As you know Brother Ray died a few years ago, and the song was given to Taylor Hicks. Enjoy!!!!


Posted by Blues Historian at 7:33 PM

Taylor Hicks is certainly the real deal, how come its so hard for everyone else to realize this too.

got to pay your dues if you want to sing the blues, and you know it don't come easy.


He is just paying his dues in a different way. He certainly paid his due the old fashioned way by playing gigs in the honky tonks, and juke joints of the south. So give it a little time for the American Idol tag to wear off, and he will do fine.

This is one of my favorite Taylor Hicks songs.Just his gorgeous voice and the harmonica and it's perfection. I swear he can make the harp weep,he is such a talented musician.

Okay - this gives me chills - it's so incredibly good. You just don't see raw talent like like this on TV anymore. Taylor is just so fabulous - no other word to describe it.

I just have to believe that, someday, the world will come to love and respect Taylor's talent and work ethic. He so deserves some credit rather than the snarky jabs he gets from DJs and most media outlets. I will stick with him and support him no matter what!

I have seen Taylor perform many times over the past few months and I can tell you he is a multi talented powerhouse of a performer who leaves you breathless and wanting more after every single show. He is so real and he is so raw and bluesy....the combination is dynamite! Taylor is here to stay....

Hi Tom,
What a treat to discover this blog from a posting I just found on the Boogie Board... You've got an fantastic site here... Kudos...

I am thrilled to see you acknowledging Taylor Hicks, who is, imho, truly one of the top contemporary soul/blues/'modern whomp' musicians ... and unfortunately so many folks are missing out because they only associate him with American Idol, which is so far from who he really is...

NOTE: Another 'appreciator' of the "The Right Place" is its co-writer Jim Vallance (whom you forgot to credit along with Bryan Adams)! Check out his notes on his wonderful website about how this fine song made its way to Taylor last year:

and while you're there, I recommend exploring around and learning about Jim's amazing background...

Another example of not just Taylor Hick's consummate musicianship, but also of what great stuff his fans are creating, is this video collage by "TrueNorth" of Taylor performing Randy Newman's brilliant "Louisiana 1927" in Marksville, LA from the end of July, which weaves together video from that song and photos from 1927's flood and Katrina's aftermath.. powerful and beautiful...

Btw, keep on the lookout for the DVD of Taylor's show at the famous Warfield Theatre in San Francisco from May 9, 2007, which should be coming out in the next few months... I was privileged to be there right next to the stage and was completely blown away by him and his extraordinary band...

P.S. As an old friend of Otis Taylor's, I was also really glad to do a search on your blog and find that you have many posts about him and his music- excellent!

Just love Sheri Shepard's reaction when Taylor finished singing - "Oh my God, that was so awesome!" Yes, Sheri, indeed it was!

That beautiful voice and wailing harp "gets" me everytime I hear "The Right Place". Taylor Hicks is the "real deal" folks - and what makes this even better - is that he's a nice guy!

I, along with so many others, just hope that some day he'll be recognized for the true talent he is. Thanks for the video, Bluesman!

THE RIGHT PLACE has the potential to become a standard which would be played over and over again as the years go on.

This song is an inspirational genre very similar to LEAN ON ME and/or STAND BY ME ( and I might include HE AIN'T HEAVY, HE's MY BROTHER ). Unfortunately, his handlers chose JUST TO FEEL THAT WAY, of his post-idol album as his first single because they thought it would have more widespread ( read "POP" ) appeal.

Well, it did quite respectably but not spectacularly ( hitting a peak at #20 on the Adult Contemporary airplay charts ).

It's a gift to the world that we found the song at last and it was sang by the right person.

Thank you for the clip. Taylor does this better then the Beatles.
Love that rich voice.