Posted by Blues Historian at 10:31 PM No comments:

Here is a cool jump blues!

Posted by Blues Historian at 10:17 PM No comments:

Posted by Blues Historian at 10:14 PM No comments: 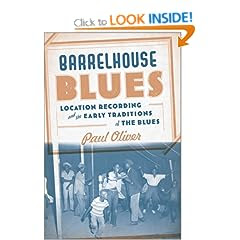 The Mercury News website has a book review of Paul Oliver's Barrelhouse Blues. Paul is one of a large handful of blues researchers who has done a lot of hard work keeping the blues alive. To read the review Click HERE to buy Paul's book on Amazon Click HERE.
Posted by Blues Historian at 10:04 PM No comments:

August 31, 2009
RIP Jesse Fortune 2/28/1930-8/31/2009: Word just in from Susan Koester that blues vocalist Jesse Fortune passed away early this morning after collapsing onstage during his performance at the Playmate Lounge. He was 79. Jesse Fortune was a blues singer of the highest order. He was born in Macon, Mississippi in 1930, and grew up around Hattiesburg. He was greatly influenced by the vocals of B.B. King. In 1952, he relocated to Chicago, and became a highly respected singer on the windy city blues circuit. His first recording session was arranged and produced by Willie Dixon for the USA record label in 1963. The session featured Buddy Guy and Big Walter Horton as sidemen, and yielded 4 brilliant songs, including the Dixon-penned "Too Many Cooks”, for which Fortune is best known. “Too Many Cooks” would later be recorded by Robert Cray, and it has become a highly-covered number among blues bands. After a period of musical inactivity during the 70s and 80s where Jesse supported himself as a barber, his musical career was reactivated with a spectacular 1993 release, Fortune Tellin' Man, on the Delmark record label, featuring great backing from Dave Specter and his band. Jesse's recent appearances around Chicago showcased an artist of great ability. He left us doing what he loved, and we will always love him for the great blues he brought us.To read the Chicago Tribune obituary, click here
Posted by Blues Historian at 10:36 PM No comments:

RIP Gospel Legend Marie Knight 6/1/1925-8/30/2009: This sad news just in from M.C. Records; this is their announcement verbatim:
With heavy hearts, M.C. Records announces the death of gospel legend Marie Knight. She died in New York City on August 30, 2009 due to complications from pneumonia. Marie first came to prominence in 1946 when she met and started working with Sister Rosetta Tharpe. Together they would be one of the most popular gospel artists of the 1940's, and make music history through a string of gospel hits including "Didn't It Rain", "Up Above My Head", and the gorgeous "Beams of Heaven". Marie Knight and Sister Rosetta Tharpe would tour frequently together through the 1950's. In the 1960's, Marie had several R&B hits, but in 1970's Marie rededicated herself to gospel music and became a minister at the Gates of Prayer Church in New York City.

Marie Knight's recent comeback began in 2002 when producer and M.C. Records owner Mark Carpentieri invited Marie to record on Shout, Sister, Shout!: A Tribute To Sister Rosetta Tharpe. Mark recalls the phone call. "Gayle Wald, who was writing the liner notes for the project, asked me if I had contacted Marie Knight about participating in the project. I didn't know she was still alive! I called Marie, and she sounded so vibrant that I arranged studio time, and we’ve been working together ever since."

After the release of Shout, Sister, Shout!: A Tribute To Sister Rosetta Tharpe (MC-0050), tour work came in regularly for Marie Knight. In 2007, Mark Carpentieri put together Marie Knight's first full-length album in over 25 years, Let Us Get Together. The project was a tribute to Rev. Gary Davis, and was co-produced with Larry Campbell (Bob Dylan, Ollabelle, Levon Helm). The record was a critical success, with great reviews from The New York Times, The San Francisco Chronicle, The Philadelphia Inquirer, and many more.

You can listen to a live recorded concert featuring Marie via The Woodsongs Radio Hour recorded in February 2008, and click on show number 470.

Here are some YouTube links to check out: video 1, video 2, and video 3.
Posted by Blues Historian at 10:27 PM No comments:

I have no clue why I am having problems with my browsers, but neither one is working right and it is have a very negative impact on my blog. I am trying to figure out what is going on, as soon as I can fix it, I will start posting again. Hopefully by tomorrow night at the latest.