Sad news, the great Pinetop Perkins has died.  Pinetop was one of the last of the Chicago Boogie Woogie piano players.  Below is an obit from Bob Corritore, but I did want to add one story of my own.  I was lucky to have met Pinetop one snowy night in Des Moines Iowa.   Pinetop was headlining a show at Connie's Lounge with the Soul Searchers.  Pinetop was late due to the storm, so I was fortunate enough to get a chance to play with the Soul Searchers while we waited for him to arrive.  Once he was got to the bar I was able to sit down next to him and talk awhile.  He was an amazingly nice old man, (probably in his late 70s then) and he complimented my piano playing, which he was probably just being nice, but it really meant a lot to me back then!  When Pinetop finally got warmed up he got up to the piano and blew the doors off the place.  That was the first time that I realized that bluemen only get better with age.  Unlike popular music, where you are washed up once past 30.  You are only getting started in the  blues when you hit 50.  The blues unlike any other medium honors its elder blues players with a reverence like no other.  Certainly older players get recognition in Jazz, and Country, but the blues still see you as a vital contributor to the music.  God bless you Pinetop and may you, Otis, Sunnyland, Memphis Slim, and Lafayette jam away for all eternity.

RIP Melvin Sparks - March 22, 1946 to March 15, 2011. Guitarist Melvin Sparks is better known in jazz circles, but he occupied that wonderful "Jazz meets Blues " niche and excelled as a guitarist. He released a number of albums for the influential Prestige Records, later recording for Savant Records. He appeared on several recordings with musicians including Lou Donaldson, Charles Earland, Sonny Stitt, Leon Spencer and Johnny Hammond Smith. he was known as a leading light of the "Acid Jazz" movement. Last year he did a memorable performance at Bob Porter's 70th birthday party with a set that included sit ins by Duke Robillard, Shemekia Copeland, Lou Donaldson, and many others. To hear his extra cool version of "Thank You", a single on the Prestige label produced by Bob Porter, click here.
Posted by Blues Historian at 5:32 PM No comments: 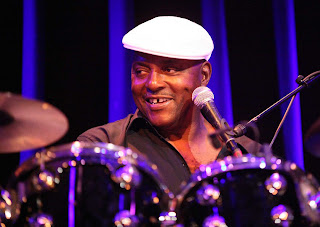 From Bob Corritore
Posted by Blues Historian at 5:27 PM No comments: