Location Of The Bilikin: Des Moines Former Hot Spot Of Blues and Jazz 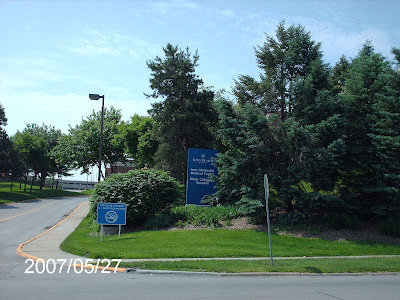 This lovely grassy knoll was once the hottest spot in Des Moines. From World War I to 1969 on this lonesome hill was the legendary Bilikin theater. The Bilikin originally opened up as the Lincoln Theater sometime around 1917. Then in 1919 it became the Bilikin. The large building held many businesses in its day. Not only did it have a two floor nightclub, the upstairs known as the Empire Room for Jazz, and Swing, and downstairs the "Hole" known for the blues, but in the basement facing Center Street were several businesses. Ironically one of the most popular barbershops located in the Bilikin facing Center was owned by the Gray brothers. The Gray brother cut hair by day, and had the best jump blues/jazz band in the city. However, they didn't play at the Bilikin they played at their own club the Sepia Club located a block and 1/2 east of the Bilikin.

The location above is now a green space in the far northwest area of Methodist Hospital's parking lot. The urban renewal movement of the late 60s brought an end to the historic theater, and musical venue.
Posted by Blues Historian at 2:03 PM