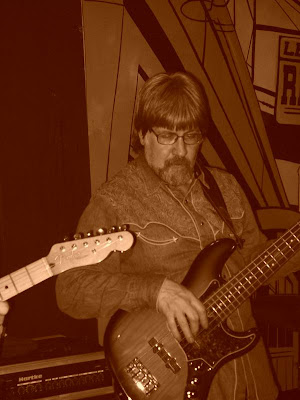 I received a phone call tonight from fellow Des Moines bluesman, and bass player, that Jim Faur died on Wednesday. His obit online was rather short on details, or about him, which is unfortunate because Jim was a remarkable man who had a lot of demons to struggle with. Jim was an incredibly gifted individual in not only music but engineering. He received a Bachelors of Electrical Engineering from the University of Iowa in 1978. He worked first in Minneapolis and then in Atlanta. When I first met him in 1994 he was playing the jam sessions as a bass player. When I first started the Tom Gary Blues Band it was a three piece band that featured myself and John "Woody Wood on drums, and we needed a new bass player since the guy who was playing with us had to quit the band. Jim was available we quickly added him, and he was the glue that really made us into a great band. John Lukehart was the last piece and we started a year run that I wish could have continued for many years. Jim really was an outstanding bass player, but he did have one problem, and while it was hard to notice at first it really grew worse and worse over the year. He was an alcoholic. We fired Jim, and then we brought him back, and over the years I would add him to my bands, but Jim unfortunately was always fighting demon alcohol. Every time I saw him sober I thought perhaps this time he will make it, but someone, or something would reintroduce booze into his life and he would slip back into his old habits. It was really sad, because when he was sober he was one of the nicest people you would have ever met. He would help you out of a jam, and I don't know how many times he fixed my equipment when it broke down before a gig, and never asked for extra money. However, alcohol had a terrible effect on his personality, and you didn't want to cross him when he was drinking. I don't know if alcohol claimed his life or if his body just gave up, but I do want to thank the Salvation Army who so many times helped Jim and put him back on his feet again. So many times they welcomed him to their shelter and fed him, got him into to AA, and turned his life around. To my knowledge they never turned him down and always did a great job for him. It is unfortunate that there are not more long term programs to help people with chemical dependence. I think that if there were longer programs Jim would probably still be with us today.

God bless you Jim. You were a friend and a hero to me. I will miss you very much. 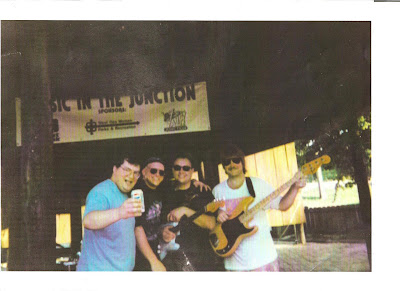 Posted by Blues Historian at 8:13 PM

I just found out about Jim's death. It saddens me greatly. Jim and I were together for almost seven years. Watching Jim drink over the years eventually took its toll on our relationship. We parted ways in December, 1989.

Even after this - I watched Jim battle his demons. His manic depression made only worse by his drinking. It was hard for me to see him fall so far. I met Jim in August of 1982. We both worked for a military contractor in Atlanta. He wrote software to test hardware. At that time, he was really into keeping his body in great shape. He was this blonde Adonis. I thought - oh my God, what has been unleashed on Atlanta. He tagged me from the get go. He watched me walk by engineering and told friends, “That’s mine”. He was slick and I was this young, naïve thing. He made his move at a company Halloween party only days later. I never saw him coming. I was toast.

He had a Siamese cat he just dearly loved. Her name was SangyDoSangy, He would croon to that cat. That cat loved him too.

In his moments of clarity - Jim was brilliant. He had a find mind and a gentle soul. Jim loved his Mom, Harriett, his sister Janis, and his nephews.

Did not mean to leave this as anonymous - I clicked before I thought.

Jim - bless your heart. I hope you were able to find peace.

Thanks for telling us about Jim in Atlanta. I had no idea he had Bipolar disorder. It actually makes sense now that I think about it. It also explains why AA never worked for him long term.

It is true that Jim was a great guy when sober. He was an amazing friend who would do anything for you, but when he was drinking another switch went off, and it wasn't good.

I worked with Jim during the 80s at a military contracting firm in Atlanta and was saddened to hear about his passing. I remember Jim being a bass player however never had the opportunity to hear him play. We'd sometimes get together listening to some of the local bands playing the Atlanta club scene and if I recall correctly one of the bands was Jerome Olds.

When I bought a Corvette Jim was the first person I showed it to. I was young, very proud of of my purchase and he humored me. Jim had a Saab at the time and I used to kid him it was probably more aerodynamic going backwards.

My wife always thought Jim had a real sexy voice

I'd tried to find Jim over the years with no success. Yesterday while having a morning coffee at our get away in Arkansas I tried again and found this posting.