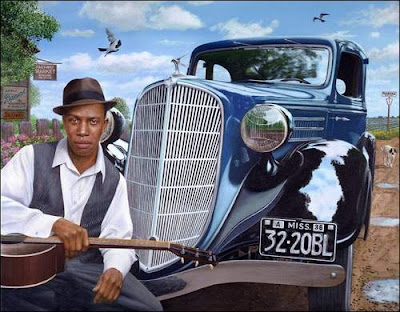 Well, it would have been nice to know that this was going on sooner. The Clarion Ledger reports the third annual Robert Johnson Blues Fest will take place this Saturday, May, 5th in Hazlehurst Mississippi.

The all-day event features headliners Bobby Rush and Dorothy Moore, and starts in the late morning with a gospel program that includes the Williams Brothers.

Other artists include Rory Block, who recently released an album of Johnson's songs, and the bands of pianist Henry Gray and saxophonist Eddie Shaw, who both played for many years with Howlin' Wolf.

"The festival raises money for our foundation, which gives out scholarships to music majors," says Steve Johnson, the son of Claud Johnson and the foundation's vice president. "My grandfather made a great impact on the music world, so we feel like a scholarship will honor his legacy and keep the music alive and strong."

This sounds like a cool festival and a family affair, as Robert's son Claud and his son Steve are involved in the festival.

The painting above can be seen at the Robert Johnson Center in Hazelhurst. The painting is by Chris Osborne, and is really outstanding. I think I will mark this one on the calender for next year!
Posted by Blues Historian at 9:29 PM