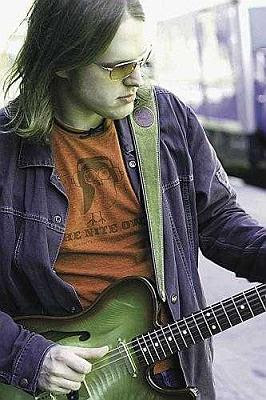 He said his jazz music is influenced by artists ranging from the 1980s heavy metal band Def Leppard to guitarist and singer Jimi Hendrix to blues legend King to singer/guitarist Eric Clapton.

Okay, I think he is a blues player, so where did the jazz reference come from, and hey, I think we all loved the jazz stylings of DEF LEPPARD! I am sure Joe knew what he was talking about, but I wonder if the reporter had a clue. I think not, because then the reporter asked one of the kids for his artistic critique of the show:

"He was all right," said Miller, who has been playing the guitar and singing since he was 8. "I was impressed by how fast his fingers moved and the tunes of the guitar."

When Miller was asked how he would rate Bonamassa on a scale of 1 to 10, Miller said, "he was a nine. It was good but, his voice was too loud; I thought he could bring it down a little."

Posted by Blues Historian at 10:07 PM