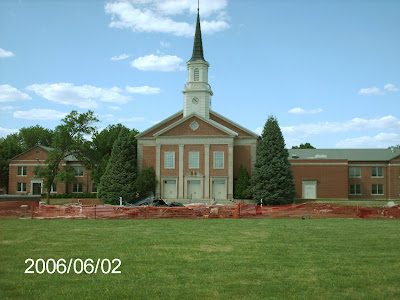 This weeks photo of the week is Bunea Vista University. I picked this photo from last summer, because I just signed my contract to teach for another year up here in Storm Lake at Schaller-Crestland schools, which also means I will be around another year to teach the History of the Blues at BV. Also BVU has been very nice to me in regards to my blues history class. They have spent a lot of money on DVDs, a subscription to Living Blues, and their ACES program has helped fund some of my more expensive musical outings. When I moved up here in 2004 I thought I would be back in Des Moines by the next year. However, each year I am passed by the Des Moines area schools(probably because I don't coach football or basketball:-) Luckily, I have a great job at both Schaller and BV. Also living a couple blocks of the lake has its advantages. About the only thing that stinks about living up here(besides Tyson's slaughter house!!) is living alone. Not much social life up here, and I swear everyone is married, or if single under 25. So once again for at least one more year I will be spreading the blues to the best of my ability from the shores of Storm Lake:-)
Posted by Blues Historian at 6:26 PM