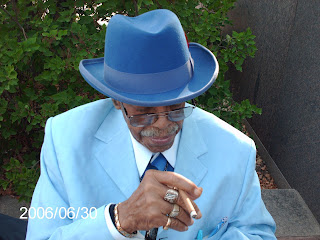 I figure my first real post should be about my hero Jimmy Pryor. Jimmy was one of the great Pre-war Post-war bluesmen who ever called Iowa home. Jimmy played the blues starting sometime in the late 20s, and continued until his death last year. He started out working in the coal mines of West Virgina and then played in the coal camps with his band the Four Aces. Jimmy played Guitar, Piano and sang. He joined the army during WWII and became a truck driver for the Red Ball Express. Dodging German bullets and bombs he returned home. He eventually moved to Detroit where he formed the Jimmy Pryor Band. In 1960 looking for more excitement than what was happening in Detroit he was booked in the 24/7 Bilikin Theater located just north of downtown Des Monies on Center Street. Jimmy was booked for two weeks to replace Pee Wee Crayton who had moved on to LA. Jimmy's two week engagement lasted 40 years! In the 1970s during the dark ages of the blues Jimmy played country western music. His favorite club was the Pines on the far northside of Des Moines. He was beloved by the country music fans that they named him to the cowboy hall of fame, and called him the Midnite Cowboy. Jimmy returned to the blues full time in the 1990s. He started out with the Sunday night Showcase at the Hull Ave Tap with Tom Gary. He also helped form the band Fat Tuesday with Scott Long, and John Wood. For a couple of years Jimmy played with both Fat Tuesday, and the Tom Gary Blues Band. Eventually he played exclusively with Fat Tuesday, and enjoyed great success playing in blues festivals around the Midwest. The last gig that Jimmy performed at was at the historical building of Iowa. Jimmy was honored for being featured in Living Blues. Jimmy sat in with the Blues Instigators and sang a medley of his favorite songs.
Posted by Blues Historian at 1:42 PM