Disney to Stay Away From Richards 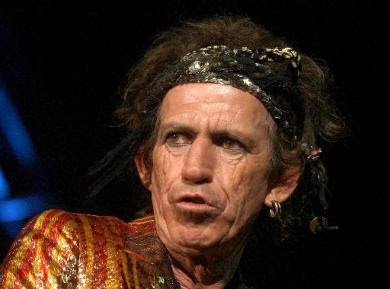 It only gets better!!! Disney apparently wont allow Keith Richards to be on the publicity trail. I guess they don't like the idea of Richards, who plays Johnny Depp's dad in the film, snorting the remains of his father. This is the text from the LA Times. I would have used a link, but you need a pass to get into the web page.

Snorting a speedball of cocaine and dear old dad may be the stuff of rock 'n' roll legend but apparently it's not the sort of tale told to children at the Happiest Place on Earth.

Keith Richards' macabre remark about snorting a mixture of cocaine and the cremated remains of his deceased father may have amused music fans with its ghoulish sensibilities, but it caused a moment of alarm inside Walt Disney Studios, home to the movie marketing team behind the upcoming "Pirates of the Caribbean: At World's End."

Richards has a much-anticipated cameo as Teague Sparrow, father of Jack Sparrow (Johnny Depp), in the hit franchise opening May 25. While drinking, womanizing and cannibalism may be comedic themes that course through the film, the real-life substance abuse and off-screen antics of "Pirates" stars are no laughing matters when it comes to marketing and publicizing one of the summer's biggest family films.

"When [a senior Disney publicist] forwarded the [Richards] story to me ... I thought, 'How are we going to spin this?' " Dennis Rice, Disney's senior vice president for publicity, said during a presentation to the media of the studio's upcoming films Wednesday morning.

As a result of Richards' remark, which was later discounted by his representatives as just a joke, it is likely that the rocker's appearances on the red carpet in support of the film will be curtailed.

"Keith won't be doing a lot of publicity for this movie," Rice added.

Gee ya think Keith won't be doing a lot of publicity for the movie! Man, you can't buy publicity like this! it is all over the blogisphere. I like how the Disney VP, thought "How are we going to spin this?" I mean is Keith running for office or something! I say let the old man go out there and be himself. Isn't the reason they choose him to play the father was because Johnny Depp was channelling Keith while playing the character????? .................developing!!:-P LOL
Posted by Blues Historian at 5:01 PM