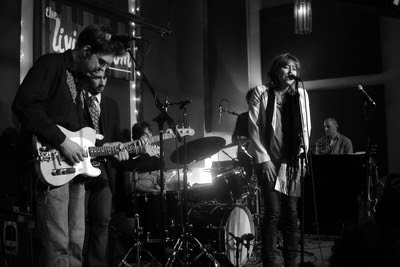 Just recieved a press release from Ariel Publicity about Jason Crigler. Jason is a great guy who has overcome some serious health issues. Check out his myspace HERE, Webpage HERE, and buy his CD HERE.

Persevering through hard times is one of the greatest and most eternal themes of blues and soul music. Jason Crigler, a New York based singer/songwriter and highly sought out guitarist has always found inspiration in that music, but little did he know how that he would endure and win a battle for his life that would give the toughest bluesman a run for his money. His new album, Down Like Hail, is a riveting document of a musician playing for the sheer love of it, but it also is the testament of someone who has played for the biggest stakes of all – his own life.
Read a complete biography
Biography

Jason made his reputation as one of the most sought after guitarists in New York through his work in the band Goats in Trees (which he formed with his wife Monica) and by playing with such luminaries as Linda Thompson, John Cale, Marshall Crenshaw, Teddy Thompson, Juliana Nash and Edison Woods. In 2003, Jason began to play under his own name, and began the process of recording what would become Down Like Hail. By the middle of 2004, Jason was excited about upcoming plans
for recording and touring, and was even more thrilled about becoming a father, as Monica was expecting their first child.

Then things took a drastic turn. Jason recounts: "It was August 4, 2004. I was playing a gig and after the first couple of songs all of a sudden things got really weird – everything sounded and felt very distant. It got so freaky I had to leave the stage. Thank God Monica was there. I couldn't hear anything. I finally lay down on the ground and that's the last thing I remember for a year and a half."

What Jason had was an AVM, which stands for Arterio-Venous Malformation. It is a collection of abnormal blood vessels in the brain, which then burst, like an aneurysm. The threat to Jason's life was very real, and initially, the doctors didn't give Jason much, if any chance to recover. ("They made a lot of doomsday predictions that
turned out to be wrong," says Jason.) He went through three different hospitals, various surgeries and even when it became apparent that Jason would survive, there was no guarantee that he'd ever walk again, let alone be a working musician.

It was a grim prognosis for Jason, both medically and financially, but it was then that his friends stepped in. In January of 2005, Norah Jones, who Jason had met and played with for years when they were both sitting in night after night at the Living Room, announced that she was headlining a benefit show for Jason at Irving Plaza, a show that raised over $50,000 for Jason's medical expenses. Norah said about
Jason in announcing the show, "Everyone who has ever had the pleasure of playing with Jason will know how special he can make it feel and sound, and what a magical cast he helps to create within all the music he plays."

With support from family and friends, Jason was on his long journey back. And after almost 18 months of intense physical therapy in which he had to struggle to relearn such basic actions as walking and talking, in early of January 2006, Jason was well enough to begin playing guitar again – but that was an immense challenge. As Jason
recounts, "Because of the bleeding I had, initially I could barely get my fingers to play. After 10 minutes I would have to stop. I saw a physical therapist, which helped, and by April, I sat in with Teddy Thompson. I played one song – it was tiring, but I did it. And then, on my birthday, May 27th, I was playing with Rachel Loshak, and it all came together. I was overjoyed."

Now, in 2007, Jason has readied the release of Down Like Hail, an album that he recorded prior to his illness, but one that with it's blues spirit, portends much of what Jason endured with his illness. He explains, "To me, it's an album about the blues. There aren't any actual blues songs, but the approach to the album and the influences come out from my love of blues and old soul. It was all recorded live
– no overdubs. Me and my guys (Paul Bryan on bass and Dan Rieser on drums) just walked in and put it down."

The album showcases Jason's melodic sensibility and versatility as a player, arranger and singer. There's the punchiness of "Bush and the Tree Song, Part One," and the loping rhythms and laconic feel of the hooky "She Waits For An Answer." Jason's love of American music is present in his version of "Swing Down Sweet Chariot" ("I got it from Elvis's gospel sessions – I don't do it nearly as well as him.") and "What I May Love," which was inspired by Jason trying a Skip James guitar tuning and then writing a song around it.

With the appreciation and hard earned knowledge of how fragile and lucky he is, Jason has now tapped into something previously unavailable to him. He explains, "I feel like I'm playing from a much more authentic place now – I'm a better player now then I was before." As a musician dedicated to constant growth, improvement and
communication, Jason Crigler is unique even beyond his considerable skills, for his playing now comes from a struggle and journey that few ever take, let alone emerge from. But after all he's been through, his goals are simpler and perhaps more profound. "I want to play good music continually do it better," he explains, "And I want to hang out with my daughter Ellie J."

Posted by Blues Historian at 7:57 PM