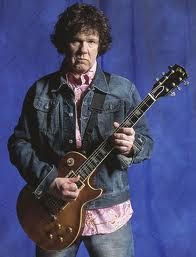 Legendary blues rock guitarist Gary Moore has died.  According to several sources he died in his sleep in a hotel in Spain.  While a few sites are reporting more, it is pure speculation until an autopsy is done.  Moore played with Thin Lizzy, and was also known as an amazing guitar player who had a great solo career. He was 58 years old.  For a quick report click HERE.  I will update if more information becomes available.

Below are some songs he is most recognized for.

Posted by Blues Historian at 9:20 PM