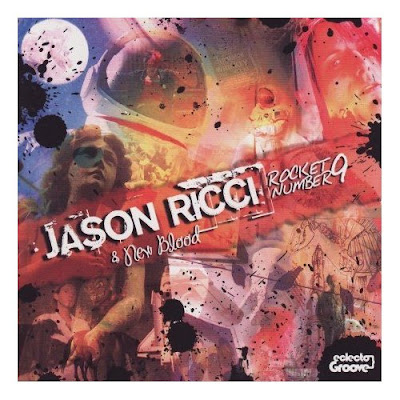 Jason Ricci has a new CD out, and it is a burner. Rocket Number 9 is not classic blues in any sense, but Ricci is a classic blues harp player in every sense. Ricci can smoke on the harp, and his eclectic combination of songs shows off his talent as both a harp player and a vocalist. His disk opens with the self titled Rocker, The Rocker. The song rocks with burning guitar leads, and classic distorted blues harmonica. Just when you have figured this is going to be a collection of hard rocking songs, the band follows up with I'm A New Man, which is a nice mellow soul tune. Loving Eyes is a long jam song, while Dodecahedron is an amazing jazz rock instrumental. Dodecahedron really showcases just how tight the band is, and you could certainly stack up this recording with any of the great jazz rock sides from the 1970s. Mr. Satan is a funky rock song that also shows off the tight arraignments of the band. A soulful blues tune Deliver Us is next and opens with a James Cotton type harp break, but then moves into a soul tune. If you are a hardcore blues fan then The Blow Zone is the song you were waiting for as Jason shows off his skills on the harp on a nice jump blues instrumental. Ricci has played and learned from the masters of the blues and it really shows on this song. Blues fans will also love The Way I Hurt Myself. It is a slow blues tune, and the vocal is very reminiscent of the great Al Kooper. More funky blues follow with The Eternal Is, once again the band is tight and the harp playing is outstanding. Snowflakes And Horses is a rocking blues tune, while Sonja is a beautiful melodic tune with a touch of western twang. The CD ends with the title song Rocket Number 9. I wish I could adequately describe this song. I think it is a song that you need to listen to for yourself. It has elements of avant jazz, with some punk sensibilities thrown in, and some bizarre experimental music thrown in for good measure. Jason Ricci and New Blood certainly are a talented group, and the band is incredibly tight. They know their instruments and they smoke. Perhaps they might scare off some of the older more conservative elements of the blues crowd, but I know that these guys put on a great show. I have heard some rave reviews of their gigs down in Des Moines so if they can fly in Des Moines they can fly anywhere:-) (btw, I know Des Moines loves the blues so everyone flies in Des Moines, but the rest of the world thinks we live in the middle of the cornfields:-)
Posted by Blues Historian at 7:15 PM