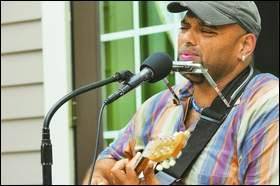 Iowa native and all around good guy, B F Burt was interviewed by the Press Citizen of Iowa City. It is a nice interview, and I can say that Burt is one of the good guys. I met him when the Blues Instigators first played Des Moines at Connie's. He and the guys were a nice bunch of guys, and they played the blues with a lot of heart. I also remember when B F and his current band of Instigators, played last year at the historical building, during the tribute to Jimmy Pryor. They let Jimmy sing for a crowd for what I think was his last performance. They gave Jimmy a great send off that day, and I am very grateful.

For the interview Click HERE.
Posted by Blues Historian at 7:42 PM