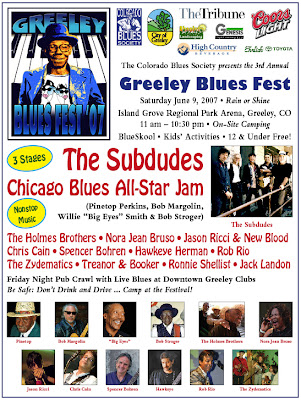 Tomorrow, Saturday June 9th is the Greeley Blues Fest in Greeley Colorado. There timing couldn't be worst since it is the same day as the last day of the Chicago Blues fest. However, Greeley is way out west in Colorado, and it is a big country:-) I count a couple of friends in the lineup. Hawkeye Herman originally from Iowa, and Spencer Bohren who I met in a very small town in Iowa. Bohren was playing two shows in Kellogg Iowa for a friend of mine. I think we had a total of six people show up for both shows! We spent most of the time talking about the blues, and I had a blast, plus Spencer is one heck of a guitar player. Also of interest for me, I opened for Pinetop Perkins years ago, when he was a spry 80 year old:-), and I played piano for Chris Cain when he was down at Blues On Grand a few years ago. I don't know if the piano player quit or was fired, but I got the gig, and it was interesting to say the least. I am also glad it was only one night. I don't know if I could take more than one night with Chris Cain. I think he is from another planet:-) Anyway if you are out in the area, it looks like a fun time.
Posted by Blues Historian at 6:26 PM