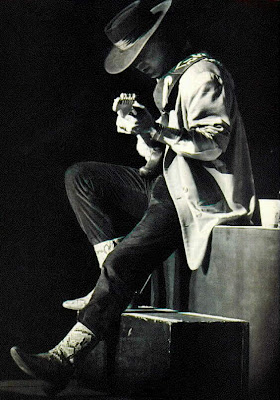 The Artist of the Week is Stevie Ray Vaughn. Stevie was one of the greatest guitar players of pop music period. Not only was he outstanding in blues, but he also could play jazz, and rock. He unfortunately died young in a Helicopter crash after playing an outdoor festival. His death left a hole that has never been filled. One of the problems of someone of his stature dying young, is that everyone wants to fill his shoes. Over the last ten or so years many, many, many, young guitarist have been called the next Stevie Ray, or compared to him. This is unfortunate because I believe that Stevie would have told all of them to be themselves. Early in his career Stevie was burdened with the moniker of the next Jimi Hendrix. He was one of the few guitarist to actually live up to that billing and create his own space in the guitar pantheon. He did it by doing it his way. He didn't mimic Hendrix like so many before him did, Stevie took what Hendrix, T-bone, Albert King, and a few other heroes of his did, and took it another step forward. That is in a classic sense what you do with the blues. You respect the blues, and its elders, you learn what they did, and you make it your own.

Enjoy the Videos in the Google video bar located on the right side of the page.
Posted by Blues Historian at 11:14 PM