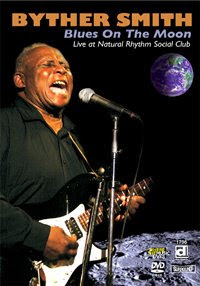 Before I received this disc, I had no clue who Byther Smith was. Now that I have it I am glad to have found him! Byther Smith, and his new DVD Blues On The Moon, released by Delmark Records, is a true gem of in your face Chicago blues done old school. This is down in the gutter blues. No false pretension, no phony screaming rock guitar, no star search vocals, but true blues from deep in the heart of Byther Smith.

Byther Smith is one of many examples of why the blues is still alive. Smith is a wry 75 year old bluesman who much like my hero the late Jimmy "The Midnite Cowboy" Pryor only gets better with age. The show was recorded at the Natural Rhythm Social Club, located on 59th and Damen in the southside of Chicago. The club is certainly a classic! Although well lit for the video, I can imagine what it really must be like when the regular bands are playing. Not a dive in any sense, but a real working blues bar. The kind of place you play at and if you play the blues good the crowd will love you, and Byther knows what he is doing. According to the notes in the booklet Smith was a cousin of JB Lenoir, and Lenoir started him playing the guitar! Smith has been around but hasn't received the same kind of notice that other blues performers from Chicago and that is a shame. However, given the large number of players in Chicago it is probably pretty easy to get lost in the shuffle(pun intended:-)

I could give a blow by blow account of the disk with detailed descriptions of each song, but that wouldn't be giving justice to this great DVD. The band is loose, and sometimes the beat gets dropped,the beginnings of some songs are off at times, but that is the beauty of it. Unlike the polished never make a mistake, play the song the same way even the solo that many contemporary blues bands do, Blyther Smith does it the old fashioned way. Everything happens when it happens, and the music breaths! Solos come from the heart and the band shows it great loving respect to this Chicago bluesman.

This is a must buy! Go to the Delmark website and buy this DVD NOW!!! Trust me you won't be disappointed. This is the blues that needs to be remembered. Do your part by buying this disc, and while you are at it. Thank Delmark Records, and the great Bob Koester for keeping the blues alive!

To order this great DVD, or the CD of the show visit the Delmark website HERE. To check out his offical webpage Click HERE.

The only upcoming show I found of his is at the Joliet Blues fest on July 29th.
Posted by Blues Historian at 9:39 PM