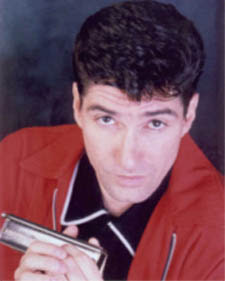 From The Bob Corritore Newsletter

I had two scheduled club performances this week (though I was not scheduled to play at the festival this year). The first was at Buddy Guy's Legends with my longtime friend and musical associate, the legendary Louisiana Red. The band included Chris James and Patrick Rynn of The Rhythm Room All-Stars, drummer Eddie Kobek, and of course Louisiana Red and myself. Red was in terrific form, and his show was warmly received. In the audience was club proprietor Buddy Guy, as well as Magic Slim, Barrelhouse Chuck, and Nick Moss and The Fliptops.

My other gig was the American Blues Legends Showcase at Reggie's put on by organizer/musician Cadillac Zack. I appeared as a special guest with my old boss Tail Dragger. Also that night were fine sets by Eddie C. Campbell, Byther Smith, the great Elmore James, Jr. (whose new CD Daddy Gave Me The Blues on JSP Records was being celebrated that night), and Cadillac Zack. Also performering that night, some serving in a backing capacity, were Twist Turner, Scott Dirks, Rick Kreher, Chris James, Patrick Rynn, Karl Meyer, Martin Lange, and Big Rockin' Daddy. This show was spectacular in that it showcased four of Chicago's greatest blues performers all in one night. On a side note, Scott Dirks, who served as the house harmonica player during the course of the evening, brought along a vintage Fender Concert amplifier once owned by Louis Myers, that I had the pleasure of playing through. This amp was the one that Louis used when he recorded his brilliant "Top Of The Harp". Word has it that Little Walter played through this amp on a number of occasions. Another interesting story is that once in the 1960s, Jimi Hendrix was making a guest appearance at a Boston club that Louis was playing at, and had used that amplifier; but when Louis saw Hendrix turn up all of the controls to maximum, he became very upset. Years later Louis told Scott Dirks the story, with Louis stating in his own words, "I wanted to kick that boy's ass!"

I also sat in for a couple numbers on Rob Stone and the C-Notes' show Friday at the House Of Blues Chicago, which also featured Sam Lay, and Chris James and Patrick Rynn (of The Rhythm Room All-Stars). Later that night, I sat in with Billy Flynn's band with guest drummer Kelly Littleton of Lil' Ed and the Blues Imperials at Billy's gig at Smoke Daddy. Billy and I tore it up on a Jimmy Rogers number followed by two Muddy Waters songs which were warmly received from the audience. Also performing that night at Smoke Daddy were James Wheeler, Martin Lange, Scott Dirks, Cadillac Zack, Scott Bradbury, and Joe Nosek of the Cash Box Kings.

I was interviewed on three separate occasions during the week. The first was on Wednesday, for the Blue Shoe Project. This was a filmed interview organized by Jeffry Dyson and Fernando Jones. The concert that became Blue Shoe Project's Grammy®-winning CD Last Of The Great Mississippi Delta Bluesmen: Live In Dallas (featuring Pinetop Perkins, Robert Lockwood, Jr., and Honeyboy Edwards) was filmed; and the purpose of the interviews was to add perspective to the performances. Willie "Big Eyes" Smith and Bob Stroger were interviewed about their history with Pinetop Perkins, and I was interviewed about my 30 year friendship and musical association with the late Robert Lockwood, Jr. Look for clips from these interviews and more in the forthcoming DVD version of this performance. The second interview was at the Koko Taylor Foundation tent by Clarence Stevens of Blues You Can Use out of Gary, Indiana. Clarence and Koko co-host this radio show, which is broadcast Thursday nights from 7-10pm in Gary, Indiana at WGVE 88.7, and on the web at www.blueswebradio.com. The third interview was by radio show host and photographer Robert Barclay, whose blues show Juke Joint airs on WCMU 89.5FM in Mount Pleasant, Michigan on Sunday nights from 8pm to 11pm or on the web (click here). Robert asked me specific questions with the idea of telling a story to lead into songs. I told stories of Chico Chism, Bo Diddley, Big Walter Horton, Big Pete Pearson, Dave Riley, and more. Thank you to all the interviewers for taking interest in my music and blues experiences.

There were many wonderful performances at the festival, such as the legendary Little Willie Littlefield, who was in great voice and amazingly nimble on the piano. Little Willie currently lives in Holland, so this U.S. appearance was a rare treat for festival-goers. I also enjoyed a great set on the Front Porch Stage with Honeyboy Edwards, Louisiana Red, Johnny "Yard Dog" Jones, and Billy Branch. I was especially knocked out by Johnny "Yard Dog" Jones' strong voice on his rendition of the Muddy Waters song "Honey Bee". Harmonica player/vocalist Reginald Cooper did a great set at the Louisiana Bayou stage - Reginald was called at the last minute to substitute for the hospitalized Little Arthur Duncan, and was backed by Arthur's band, The Backscratchers, which included Illinois Slim, Rick Kreher, and Twist Turner. This combination had a great sound, which we hope will someday be recorded. L.C. Ulmer, from Ellisville, Mississippi, had a spectacular voice, and his down-home guitar really hit the spot. I loved the feisty solo set by my dear friend Sam Lay, accompanied by his own guitar playing. A nod to the Fat Possum sound, with Cedric Burnside and Lightnin’ Malcolm was followed by T-Model Ford. And I could not forget the always-satisfying, house-rockin' Chicago blues of Magic Slim & The Teardrops. B.B. King, whose dignified ambassadorship of the blues never ceases to amaze, closed out the fest as the headline attraction. There were many other great festival performances too numerous to mention.

Congratulations to the Chicago Blues Festival for its 25 year anniversary and its brilliant legacy. Check out the latest Living Blues Magazine devoted to Chicago blues in honor of this festival's milestone. Thanks to all the friends, fans, supporters, artists, and tireless workers at this year's festival. It would be impossible to mention everyone who makes this wonderful event such a success, but nevertheless a heartfelt thanks to all for the friendship, camaraderie, and great music in Chicago!

Posted by Blues Historian at 3:25 PM