What A Friday Night: The Saga Of The Grand Piano Bistro

I got into Des Moines early enough to check out the nightlife, and I wanted to see the new hot spot, The Grand Piano Bistro! I decided to ditch my bluesman attire for more urban professional clothes, a very nice, (and I mean Very Nice) BVU Athletics polo shirt, and matching BV cap! I must say that my disguise was very appropriate for this new hang out of the late 20s early 40s, I am too old for the meat market, but I want to been seen at location!! However, the door man must have sensed that I was not one of the trendy types when I was informed that he needed five dollars, an ID, and I couldn't go in because it was crowded!! Hmmmmmmmmmmm, what is this New York???? Studio 57???? However, your intrepid reporter was undaunted and I decided to watch the show from the large picture window outside the bar! I am pleased to report that I am glad I saved my five dollars. A couple of hammy piano players acting out for a bunch of drunken drinking like I'm 20, but I am really 40 crowd! I think the highlight of the show (or in this case lowlight) was when they did a dueling piano version of American Pie WITH AUDIENCE PARTICIPATION!! (really only Don McClain can get away with performing that song and making it work, any one else is just a parody) Needless to say I decided to move on to greener pastures and worked my way west to the legendary Blues On Grand. 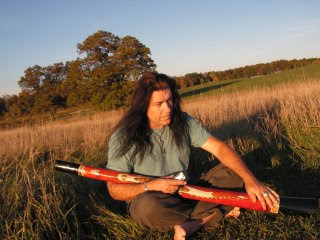 I arrived at Blues On Grand in time to see former Australian now living in Michigan Harp player Harper. I don't know his last name, he goes by Harper, but his name is well deserved. This guy makes some of the strangest noises on that harp that I have heard, and I have had the pleasure of playing with some of the best in Kansas City. They didn't do some of the stuff this guy does. It is hard to explain. I almost think that he was humming and blowing at the same time to create these weird kind of glissando that bend way to smooth for a harp player. It is possible that it is something he learned from playing the indigenous instrument from Australia pictured above. He played a song with that and it was a very cool low sounding instrument that had some weird enharmonic going on. It is very much like the intro to the Globe Tracker series on Travel TV, or IPTV. Harper also can sing. He can sing in a straight blues style, but also can sing in a bass register, while his guitarist sing tenor that has a jazzy feel like the old Climax Blues Band. So it was a great night regardless of its start, and the BOG delivered as usual. If you want good music without the trendy drunks go get the blues at the BOG.
Posted by Blues Historian at 9:51 AM