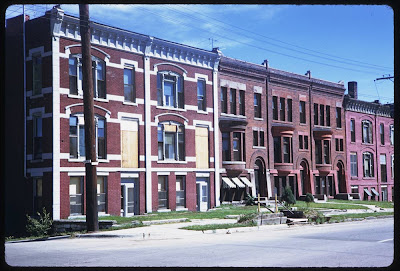 This is a photo of 3rd and Center about 11 blocks east of the black business district of Des Moines. These look like pretty nice brownstones, but they are long, long, gone now. Right now it would be the far south west corner of the new arena. These buildings were probably torn down not long after the photo was taken by Charles Cushman in 1958. That was about the time of the River Hills urban renewal effort. many of the people who lived in the River Hills area ended up living in the Center Street area to the west of where this photo was taken. This caused the area to get overcrowded, and to many people who used to live on the street helped lead to its decline. If you wonder what this has to do with the blues, it is because Center Street was a hot spot of blues and jazz in Des Moines. Without a doubt the streets decline began in 1958 for two reasons. The influx of people from River Hills, and plans for Interstate 235, which in 1958 was supposed to run right down Center Street. However, that plan eventually was scrapped in favor of moving the freeway north of Center. Yet, most of Des Moines still thinks that Center Street was demolished by the interstate, when in reality it was the urban renewal movement in the 60s that destroyed the street. To see more of Charles Cushman's photos click here.
Posted by Blues Historian at 1:04 AM

Bluesman, did you notice the Cushman photo of DSM on my blog? I'm always on the hunt for old photos of Dead Moines, particularly color pix! --Otto.

I did see your Cushman photo. In fact, I followed the link to the site at the University of Indiana and found the center street pic! Nice find Otto! If I see any old Des Moines pics I will send them your way.