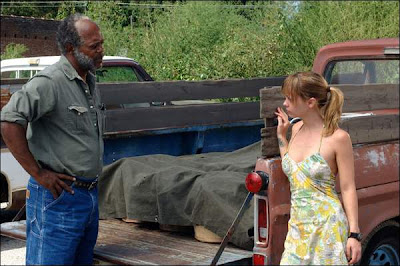 Gainsville.com has a movie review of Black Snake Moan. Overall it is a good review. (I still haven't seen it ACK! The hazards of living in the hinterlands) Then there follows some short reviews of other blues films. However, my old bugaboo, reporting that Robert Johnson sold his soul to the devil popped up again! ARRGH! Here is the quote.

The greatest legend of the blues is the tale of the man who met the devil at a crossroads and bargained his soul for blues fame. Great bluesman Robert Johnson was the basis for the legend, but permutations of the story have been used time and time again, from "Angel Heart" to "Oh Brother Where Art Thou?" The 1986 movie "Crossroads" bases its story on the legend, as well, and serves as a love letter to the blues.

One more time for those who are hard headed. TOMMY JOHNSON sold his soul to the devil. NOT ROBERT JOHNSON. In the movie O Brother Where Art Thou? The bluesman who is picked up in the car who just sold his soul was TOMMY JOHNSON! In the credits in case you missed that,(Which a lot of people did) Chris Thomas King as TOMMY JOHNSON. Okay so the movie kinda of adds to the confusion by having King dressed more like Robert Johnson, and the song he plays is Skip James. But it is TOMMY JOHNSON. Robert Lockwood JR. fought this myth for his entire life. Lockwood was the step son of Robert Johnson, and Robert Johnson taught him how to play guitar. Lockwood knew Robert Johnson well, and continually defended Robert Johnson's legacy. He said in many interviews that Robert never said anything about selling his soul to play the blues. Only Son House said anything about Robert selling his soul, and I contend that he confused Tommy, and Robert, since Son was asked about it 30 years after it happened. Of course, the reality is no one sold their soul to the devil to play the blues, but Tommy Johnson was playing off the popular superstitions of the day in the delta. Much like the blues are dying lazy journalism will keep the myth of Robert Johnson alive and well.
Posted by Blues Historian at 7:45 PM

I've navigated up to this blog,
through the stormy seas of internet,
and now that i've find the way,
i´m inviting you to follow this direction:
André Benjamim,
straight to my new blog!