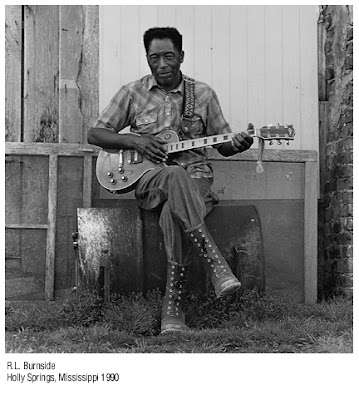 This week's artist of the week is R L Burnside. I chose R L because his family is featured in the current issue of Living Blues. R L's legacy lives on with a large number of kids who are carrying on his work, including Iowa's own Burnside and Reed. (however, I didn't notice them in my first quick scan of the magazine) I mentioned a couple of weeks ago about people lamenting the death of the blues, but this months Living Blues is proof positive that the blues is alive and well in the Mississippi Hill country. I also caught an episode of the PBS show Globe Trekker. Normally they travel to such exotic places like Africa, the jungles of Asia, or the heart of India, but last night they were trekking across the American deep south. They stopped in Clarksdale the heart of the Mississippi Delta, and sure enough in an old juke joint was an unknown blues band belting out hard core eletricfied blues like it was soaked in Mississippi moonshine. All I can say is the Blues Lives!
Posted by Blues Historian at 9:13 PM

Feels good to see someone else out there appreciating Burnside's work. The first time I heard his music was in '05 - a free Amazon.com download of Bad Luck City...and I was completely hooked. I can't quite explain the feeling his music evokes in me, but it's the sort of thing that makes your spinal cord feel a bit like jelly, and your nether regions grow warm and somehow...able. Funny.

Burnside was the man. We are lucky here in Iowa to have his son and Hal Reed introducing and keeping the Mississippi Hill music alive up here in the Hawkeye state.