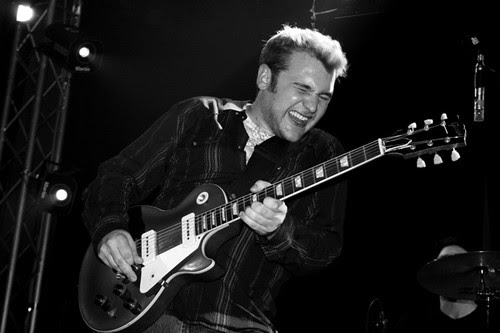 A big benefit for bipolar disorder in the memory of Sean Costello is coming up in March. Here is the press release

FOR IMMEDIATE RELEASE
January 26, 2009 9 A.M. EDT
BENEFIT CONCERT TO BE HELD IN HONOR OF SEAN COSTELLO
ATLANTA, GA - The Sean Costello Memorial Fund for Bipolar Research will hold its first benefit concert Sunday, March 1, 2009 at the North Atlanta High Center for the Arts. Sean was a beloved blues musician from Atlanta, who was internationally acclaimed, and in his honor, fellow musicians Lurrie Bell [2008 Living Blues Awards for Blues Artist of the Year and Most Outstanding Guitarist], The Wood Brothers, King Johnson, Felix and the Cats with Jon Liebman and the Soul Shakers will lend their time and talent to this cause. Doors will open at 4:30p.m. for review of silent auction items with entertainment to follow at 5:00p.m. Tickets are $30 and will be available online and at the door. Food and beverages will be available for purchase. Donations are tax deductible.

The benefit emerges as the first project of The Sean Costello Memorial Fund for Bipolar Research, an organization founded by his mother, Debbie Costello Smith, upon Sean’s untimely passing. Sean was acclaimed for his musical prowess at a very early age. He was designated the Beale Street Blues Society Best Performer at age 15; was nominated for a W.C. Handy Award for his album Cuttin' In in 2000; was voted Best Blues Band in Creative Loafing and Atlanta magazine; was featured on the cover of Blues Revue in February of 2002; and was named the Best New Act by the French Blues Feste in 2003. Most recently, Sean was nominated for two Blues Music Awards: Best Contemporary Blues Album and Best Contemporary Blues Male Artist of 2008.

Sean resided in Atlanta, but was known throughout Europe and the U.S. as a talented, but humble musician who readily shared his talent with young and old. He played with musical greats BB King, Buddy Guy, The Fabulous Thunderbirds, Hubert Sumlin, Elvis Costello, Etta James, Pinetop Perkins, Bo Diddley, Little Jimmy King, Nappy Brown, Bob Margolin, and many others. He formed special and lasting relationships with Felix Reyes, Donnie McCormick and Levon Helm. Sean had the honor of playing for James Cotton’s birthday, as he was Mr. Cotton’s favorite band.

Sean passed away suddenly in April last year on the eve of his 29th birthday, after quietly battling depression and anxiety for more than 10 years. It was only a year before his passing that Sean was diagnosed with Bipolar Disorder. At the time of his passing, he was in treatment to overcome the debilitating symptoms of this mood disorder and the often associated self-medication.

The Sean Costello Memorial Fund for Bipolar Research is a non-profit organization that has attracted a dedicated Board of Directors and an Advisory Board of renowned clinical researchers as a direct result of Sean’s reputation as an artist, an exceptional person and friend. In creating the fund, the board hopes to increase research for treatment, develop and support education for early diagnosis and intervention, and eventually create a program for musicians and artists seeking holistic support in their effort to lead functional, healthy lives.

Posted by Blues Historian at 8:17 PM