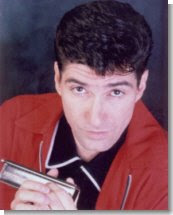 Saturday, June 7, 2008 - American Blues Legends Management Showcase at Reggie's, This great showcase will include Elmore James, Jr. (who will celebrate his new release Daddy Gave Me The Blues on JSP Records), Byther Smith, Eddie C. Campbell, Tail Dragger, The Hayes Brothers, Cadillac Zack, Rick Kreher, Scott Dirks, Bob Corritore, and Donna Oxford. Bob will be making a guest appearance backing his old boss Tail Dragger on this show; Bob's set will be at approximately 11:15pm. Show time is 9pm; cover charge is $15. Party alert: there will be a free shuttle service to the show leaving from the corner of Columbus and Monroe at the following times: 8pm, 9pm, and 10pm. American Blues Legends Management is a booking and management organization founded by guitarist/producer Cadillac Zack, and its primary focus is advancing the cause of traditional blues. Reggie's is located at 2105 S. State Street, Chicago, Illinois 60616. To see a flier for this event, click here. For more information about this show, call (323)377-5291.

As always, Chicago is a real blues treat, and the festival serves as a great center point for a spectacular gathering of blues people. Also, while in town, check out Honeyboy Edwards' annual birthday bash on Wednesday, June 4, 2008 at a new venue (managed by Dave Specter) called Society for the Preservation of Arts and Culture in Evanston (S.P.A.C.E.). This event is being called Blues On The North Shore, and is produced by Lynn Orman. Also included in the show's lineup are Eddie Clearwater, Barrelhouse Chuck, and Katherine Davis. For more information, click here.

"I stopped by to check on Little Arthur yesterday at his new hospital, Advocate Bethany Specialty Hospital, at 3435 W. Van Buren. The hospital is very nice and easy to get to, off the Eisenhower Expressway. That is about the only good news. Arthur is once again hooked up to a battery of machines, and the nurse that was attending to him said that he 'had a lot going on'. I think he knew who I was, and tried to talk, but he would then fade away for a few minutes. His main problem (among many others) is still his breathing, which is still assisted by a ventilator. It's sad, because if he does know what's going on, it has to be very depressing at this point. If any of you are in the area, stop by; because if he does know what's happening, a visit might help his spirits. The hospital is on Van Buren just west of Homan (Kimball); enter from those directions as the streets run weird around there. There is parking right in front. I wish there was better news to report."

Posted by Blues Historian at 10:23 PM