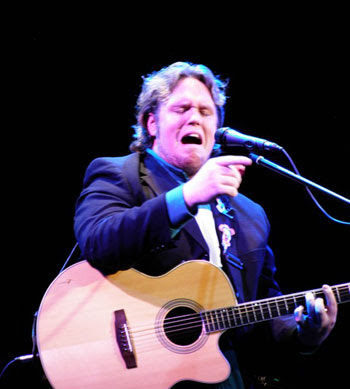 Got an email from one of my friends KraftR about a blues artist named Charlie A'Court. Check him out!!

Charlie is a 29 year old singer/songwriter from Nova Scotia. He is an indie artist, and has two albums out, working on his third. I introduced him to the Boogie Board, and was overwhelmed by the positive response I received, they seem to like his music as much as I do. He was nice enough to connect to the board, and even got online with us live one night while we listened to his albums, and he discussed his music and answered our questions. He is a personable man with a great sense of humour.

Charlie has won numerous awards in these parts, including East Coast Music awards (a pretty big deal in Canada). This Fall he won Music Nova Scotia’s “Blues/R&B Artist Recording of the year”, and has won various other awards for his current album “Bring On The Storm”.

Charlie’s first album, “Color Me Gone” is more blues oriented than the Current “Bring On The Storm, which has a more contemporary feel. I describe Charlie’s music style as a contemporary interpretation of the Blues tradition, I think his vision is similar to Taylor Hicks in that regard, but I could be wrong, what do I know? Here’s what I do know….. I like it. I hope you do too. Charlie plays all the guitars on his “Color Me Gone” album, and most of them on “Bring On The Storm”. I have seen him live, and he is wonderful to watch. He frequently starts his tunes live with a bit of a solo. His voice has a rich tone, and he has great range. He uses his wonderful falsetto to maximum effect.

Here’s where you can find him on the web, song samples on the MySpace page…:

Posted by Blues Historian at 11:27 PM

I'm liking Charlie. Will have to check him out further.

Was one of those that sat in the night of the listening party and was so impressed with Charlie that I ordered several of his CDs to use for Christmas gifts. The response was unanimous - they like both his voice and the songs he either wrote or co-wrote. Think he would do well if he toured some selected venues in the New England area. hint?