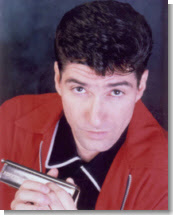 I love this newsletter that Bob sends out to people on his email list. Not only does it cover what he is doing, but it also covers what everyone else is doing. Plus he has links to some great videos. Check out the Johnny Shines videos that he linked to at the bottom of the post. Great stuff!!!!!!!!!!!!

Johnny performing a fantastic version of "Sweet Home Chicago" on acoustic guitar. Done in the style of Robert Johnson but with all of Johnny's amazing musical personality, click here.

Posted by Blues Historian at 9:28 PM