Artist Of The Week: Robert Johnson 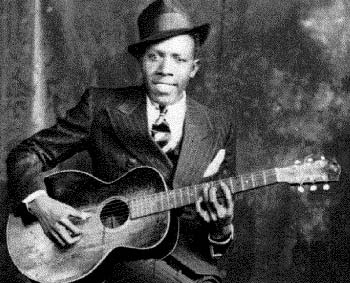 The artist of the week is one of those artists who probably has had more written about him, and yet we really know so very little about him! Robert Johnson's history is probably the most confused and mythologized story in the blues. Robert Johnson is one of those figures in history that truly should have drops through the cracks of time never to be seen or heard, but luck intervened and the world listened. Johnson died young, and died when his popularity was limited to mostly juke joints in the south. He certainly traveled around the country, but he would have been the typical hobo musician going from place to place looking for a place to play and food to eat. What made Robert Johnson into the mythical blues hero of today was a couple of things. First, John Hammond picked Johnson to perform at the Spiritual to Swing concert. Unfortunately Robert died before he could play the gig. (Big Bill Broonzy took his place) Second, Alan Lomax years later went looking for him and found his mother, and learned the about Roberts last days. However, it is Eric Clapton The Stones, and Led Zeplin that listened to Robert Johnson King Of The Delta Blues, that made Robert Johnson into the legend. I suppose to there ears and the fans of those bands who went to find those records, Johnson sounded unearthly, and then add some misinformation supplied by Son House, and you can see how poor Robert done sunk down at the Crossroads. Unfortunately there are no films of Robert Johnson. Over the years people have claimed to have loss footage or photos, but there are only two photographs, and no movies. So the films in the youtube box will either be fan videos, other performers playing Roberts songs, or I have seen a few anti Robert movies pop up on occasion at Youtube.
Posted by Blues Historian at 8:44 PM

That's an awesome cd which I have and listen to. Great guitar player IMO.
I remember that on the tv show
"Judging Amy" they had an episode about a mother with an austic child, mother's boyfriend had an LP of Robert Johnson he would play for him. When the couple split up the child had all kinds of behavior problems until the boyfriend came backand played Robert Johnson's music.