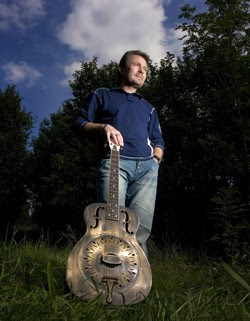 A cool article from the Prague Post, about František Javůrek, who makes resonator steel guitars. I learned something new from the article, that the resonator guitar was created by a couple of Czech immigrants here in the United States. Here is an interesting quote from the article:

Two brothers, John and Rudy Dopyera, invented the resonator guitar as we know it today. They were born the sons of a local miller in Dolná Krupá, a village in the Trnava region of Slovakia. John built his first violin at an early age. After the family emigrated to California in 1908, John became a master luthier. Then, in 1926, vaudeville performer George Beauchamp asked him to construct a guitar whose sound would be louder and have more bite, and therefore outshine the other instruments in the combo. John Dopyera arranged three metal cones in a triangular pattern within a metal body, and joined them by a three-legged spider that supported the bridge. The basic design principle is similar to that of a loudspeaker, with the spider replacing the electro-magnetic driver. A later variation, also replicated by Amistar, used a single 9.5-inch cone that dramatically amplified the string vibrations. It had a less mellow sound, desired by some musicians, but increased the volume.

To read the whole article Click HERE
Posted by Blues Historian at 7:53 PM

Having met František Javůrek several times, I've come away with a sense of how large his ego is, coupled with his poor manners. He DOES make a nice resonator, there's no arguing. I own one his earlier efforts, but I'll never consider buying another one them simply due to his poor attitude. If a guitar maker is a bit of an ass, to me it seems to taint the guitar itself. Just my 2 cents.

I suppose artists can be temperamental;-) Michelangelo certainly was not the nicest person to be around!

However, what caught my eye was not the article about Frantisek Javurek, but who invented the steel guitar:-)

Glad you stopped by!