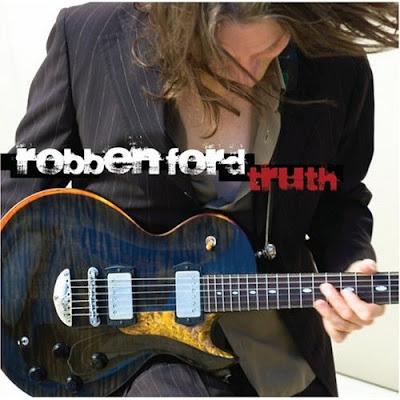 This is the first review of a blues disc here at Blues Historian, so lets start!

Robben Ford's Truth, is an outstanding disc for your CD collection. It is a nice mix of blues rock, soul, and jazz/blues/rock/fusion. Perhaps blues purists use to shuffle, shuffle, slow blues wont find something here for them, but for the rest of us who like good music, this disc is great.

The disk really takes me back to the late 70s when bands were still experimenting with combining blues, jazz, and rock. This disk is very much like Climax Blues Band's Reel to Reel, or any of the great albums put out by Blood Sweat and Tears after the mid 70s. This disc, and those albums features complex arrangements, with incredibly tight bands that could make seamless transitions from blues to jazz to rock. Ford has a great mix of Musicians that truly know how to craft a song, and mix it up with something more than the old standby shuffle, followed by a slow blues.

I like Lateral Climb, which is probably the only real blues song on the disc. It is a contemporary blues shuffle, that rocks out with the best of them. I imagine that Lateral Climb is probably the cut for the blues radio shows. If not it should be. A song that I really like that for some reason has been panned by the critics, is Riley B King. This is a nice mellow blue eyed soul tune. I can even imagine James Taylor singing this one in his hey day. I have never understood why a good pop tune can be panned so universally, and yet be so good. I suppose that critics and their tin ears just don't get it. Most of them have never played an instrument, and have no clue what goes into making music, but they have listened to hours of music so I guess that makes them an expert. I think it is too bad, because Riley B King, is a nice song, and a heartfelt tribute to BB King. One Man's Ceiling Is Another Man's Floor is an old Paul Simon song, that also features the vocals of the amazing Susan Tedeschi. I must admit that my current upstairs neighbors have made this song almost a theme song of my current situation:-) Tedeschi vocals really add a lot to the song. Her voice just bleeds soul! Moonchild Blues ends up the set of songs. It starts out as a pretty typical blues tune, but towards the end it veers into more a jazz fusion song, which is pretty interesting. It really is a lot like the whole album a pleasant mixture of some great music.

So does this album rate in the top of the blues pantheon of blues recordings. Nope, probably not, but is this the type of CD that you want in your car or CD changer at home on high rotation. YUP!! This CD sits in my car and I listen to it as I travel all over Iowa. It is one of those albums that may never get any real recognition, or a lot of airplay, but it will probably be one of your treasured albums (if it they were still vinyl that is:-) that you will play until the groves wear out:-)
Posted by Blues Historian at 10:14 PM