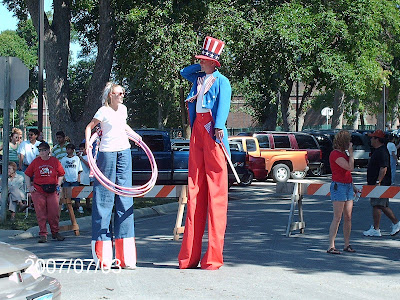 It is the birthday of America! Fun, parades, picnics, and baseball games. Of course the blues goes good with the fourth as well. Today is the biggest day of the year for little old Storm Lake. The population doubles or triples on this one day. fireworks, music in the bandshell, and lots of fun and games. Hope everyone has a safe 4th!

BTW, for the rest of the week the artist of the week is John Phillip Sousa. Sousa was one of the great marching band composers of the end of the 1800s. Sousa and marching music incredibly enough plays apart of Jazz History. Marching music was a huge fad in the early 1900s. Many musicians in New Orleans played march music. Especially among the creole (mixed race) musicians who could read music. After Plessy vs Ferguson, segregation forced mixed race creoles musician into the black area of town. in particular Storyville, which was the African American red light district. Creole musicians brought syncopation from marching music and mixed it with the blues, and Jazz was born. So enjoy some marching music on the 4th of July!
Posted by Blues Historian at 1:25 PM