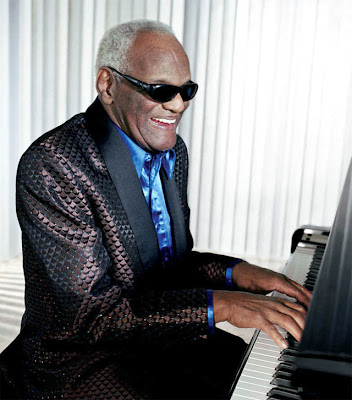 I have been updating the blog that will not die, and I ran across this great Obituary that I wrote for Ray Charles when he passed away a few years ago. I really, liked it, so here it is.

Ray Charles died of liver failure today. he was i believe 73 years old. much too young if you ask me. Ray was a great treasure to the world. he deserves parades, vigils, and three hours of programing about his positive impact on our lives. His America the Beautiful is one of the greatest patriotic songs I have ever heard. It always brings tears to my eyes.

However, I doubt any of that will happen. People underestimate the power of music and popular culture. One cold war historian once said it wasn't the cold war that brought the soviet union down, it was the Beatles, Blues Jeans, and Coca Cola. In other words our best offense was showing the people of the east what they could have if they wanted it. In the end it was the people who ended the cold war. when the borders fell in Poland and elsewhere in eastern Europe thousands from East Germany and Russia fled west which opened more holes till finally the walls came down.

Ray and the blues played a small part in it, certainly those in eastern Europe could understand the want and desire found in the blues, rock and roll, soul, R&B, and other black root music. Blues is a music that has changed the world for the better, and hopefully continues to this day.

Ray was our greatest ambassador to the music because he was talented in all forms of AMERICAN music. he played not only the blues, but soul, jazz, gospel, and County and Western. In fact, Ray was a big influence on our own Jimmy Pryor. Jimmy played country music for many years after the blues waned in the 70s. Most of Jimmy's country music came from the Ray Charles catalog.

God Bless you Ray, may you be at peace, and may you finally get to see all the wonderful things that you sang to us.

Posted by Blues Historian at 4:48 PM