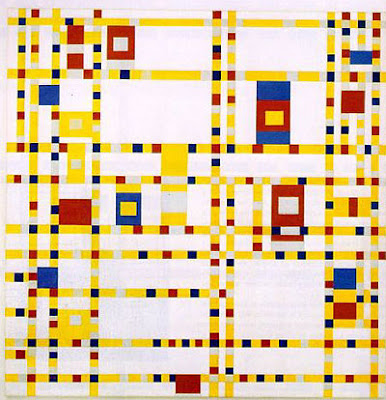 I am not sure if the above painting looks like boogie blues piano greats Pete Johnson, Meade Lux Lewis, and Albert Ammons, but according to an article in the UK Telegraph, it is the three bluesmen interpreted by the great modern artist Mondrian!

Finally, here is the paragraph dealing with the blues and art.

From the UK Telegraph:

On October 3, 1940, the night that Mondrian arrived as a refugee, his friend Harry Holtzman took him to hear the three jazz/blues pianists Pete Johnson, Meade "Lux" Lewis and Albert Ammons, who performed as a thunderous trio.

"His response," Holtzman recalled, "was immediate. He clasped his hands together with obvious pleasure. 'Enormous! Enormous!' he repeated." By that, in his idiosyncratic English, Mondrian was not referring to the size of the piano players - though they were all pretty hefty - but to the impact of their music.

Two of his late masterpieces, Victory Boogie-Woogie (1942-44) and Broadway Boogie-Woogie (1942-43; pictured above but not featured in the Pallant House show), were named after that rambunctious genre. And as the critic David Sylvester pointed out, their accelerated visual rhythm, in contrast with Mondrian's earlier work, is comparable with the driving "eight to the bar" pace of the music.

Posted by Blues Historian at 7:41 PM