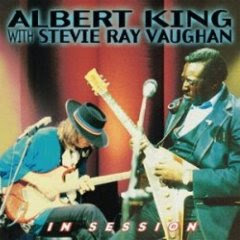 The legendary record company Stax, has a new release of Albert King and Stevie Ray Vaughan. Stax has taken an old TV recording from 1983 taken the audio track and released it as a CD called Albert King With Stevie Ray Vaughan: In Session. King and Vaughan were recorded in Hamilton Ontario. It is an interesting historical recording. Being from TV, the audio has some problems especially with the balance between the two players at the beginning at the disk. in fact, Albert tells Stevie he can't hear him during the first song and tells him to turn it up!

True audiophiles Will probably not like this disk, but I like it because you get the chance to hear a couple of guys who really liked each other trade licks and play guitar. It is really obvious from this disk just how much Stevie picked up from Albert King. At one part during the session King even kids Stevie about him stealing his licks while recording guitar for David Bowie.

The other thing that make Stevie Ray so remarkable is the way he lets Albert run the show. Stevie lets King shine. Which is directly opposite of what happened to Albert King when he appeared with Gary Moore. Anyone who had the chance to see the Moore's video which also featured Albert Collins know that Moore blew the doors off both blues legends. Although Albert did give Moore some good advice about not playing so may notes:-)

Stevie understood the blues better than most guitarists. You pay your respects to those who came before you. It is always the older blues performers show. Stevie only sings Pride And Joy but it is a treat because again he lets King add his own cool rhythm guitar to the song, and then lets Albert rip on his own solo.

This disc is a cool treat you need to grab this one to hear two of the greats from the last century.

Buy it HERE at Amazon.
Posted by Blues Historian at 10:27 PM