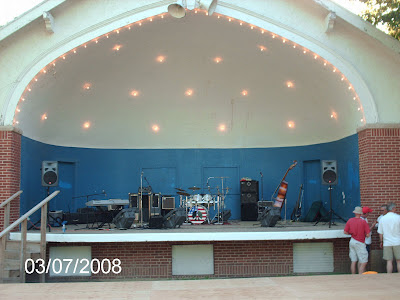 Some nice photos from The Fourth Of July! This is the band shell after we set up.I really like the lights. They put them up on the third and take them down by the fifth of July. So it is rare to see them on. They also light up the stage amazingly nice at night. 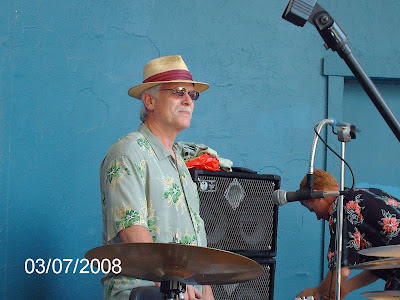 Paul Sleezer in the hat, is our all star drummer. Paul is in the Iowa Rock And Roll Hall Of Fame. He also played blues in Kansas City for several years. In fact, he arrived in KC just after I left, and we played with a lot of the same guys over the years. Don Demers is also in the picture messing with his amplifier. Don is an amazing bass player who played many years in Nashville. 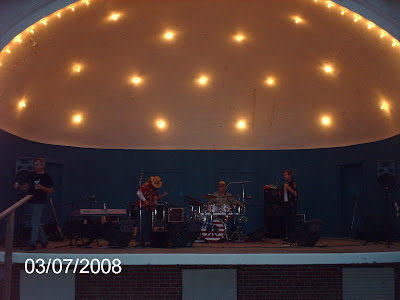 Here is the bandshell at night. On the Guitar is Jimmy Davis. Jimmy had been a road warrior many years ago playing bass guitar for several groups. Now he is part owner of the Gathering Place, which is the coolest venue in NW Iowa. We play there again on Friday July 18. 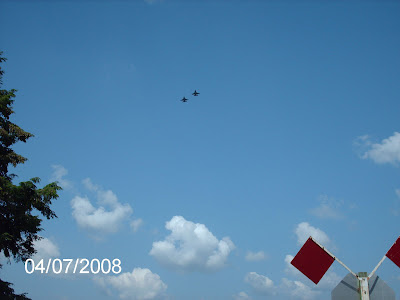 The next day was the big parade. We had a fly by, by the Iowa National Guard. Pretty cool! They are the small black specks streaking across the sky:-) 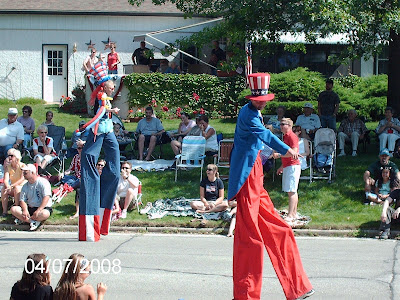 Or course the parade was a huge draw. thousands of people lined the lake to watch the parade.

I have a few more pics to upload and will try to post them in the next few days. All in all it was a great fourth, but I am beat. The keyboard player for Eric's band was sick, and I had to play for him, so both nights I played straight through with no breaks!
Posted by Blues Historian at 10:05 PM