Photo Of The Week: A Silvertone Amp 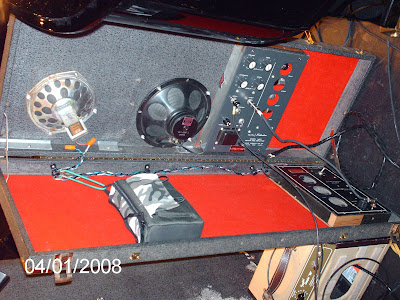 Yup, here is Erick Hovey's amazing Silvertone Amplifier!!! Sears for years made, or actually hired other companies to make musical instruments that they could sell to the public. These instruments were cheaper than what you could buy in music stores, but they didn't sound cheap. Most people are aware of the Silvertone guitar, but that was not the only thing made by or for Sears. Incredibly they made a guitar case that doubled as an amplifier. Erick loves these guitar case amps so much he has two, and uses both of them at live gigs. They are not loud so he has to mike them up to the PA, but they have a great sound.

Since this post is so popular I have added some more pics of Erick's amplifier HERE. Enjoy!

Posted by Blues Historian at 7:13 PM

Cool Beans! I've got a similar amp, but in a combo package called a Sears 5XL and the same as a Silvertone 1430. It is one of those transformless amps and has an 8" speaker and make a great harp amp that I use if for. I also have a Silvertone 1483 that I modded for blues harp playing also. Check it out at my blog.
Anyway--