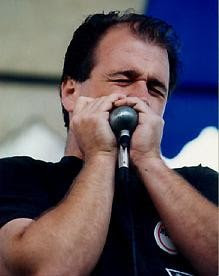 No official word on cause of death of Gary Primich, but both his ex-wife, and a former band mate have said they think he died of a drug overdose. He was only 49 years old. Now I know that the young people who read this board think that 49 is over the hill, but in blues years, he was a very young man. You really don't hit your stride in the blues until you get to 40. From reading one of Primichs band mates blog, it seems that Gary had gotten into some of the hard stuff. It is unfortunate if it is true that we have lost another great bluesman to drugs and or, alcohol. The list of fallen blues performers to either or both is long and tragic. Regardless of why he died, I think it is important that we remember how he lived, and the music he left behind. The one thing about the blues is that it lives on. Primich left a large body of work that can be listened too, or watched for years to come. So he may have left us early, but he at least left us with a great gift of his blues.
Posted by Blues Historian at 10:30 PM