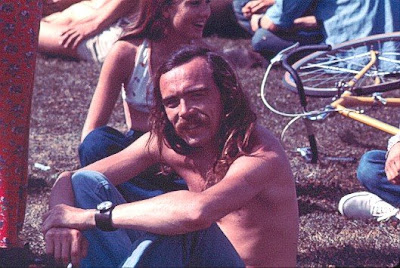 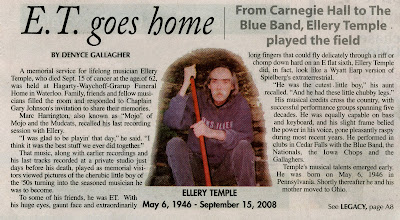 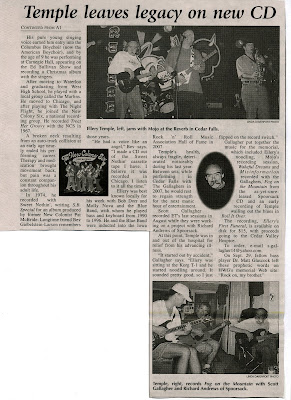 UPDATE I received an email with a great article about Ellery Temple. Please click on the photos to get a large version that you can read. (Thanks Carrie)

Another great Iowa bluesman has left us this week. Ellery Temple long time musician and member of the Blue Band in the early 90s died of cancer this week. Ellery was a friend of mine, and while he played with the Blue Band I had the opportunity to sit in and play with them. Ellery played not only the piano, but bass guitar, and when Molly would move over to the bass, Ellery picked it up and I would get my opportunity to sit in with my longtime heroes. A few times when Ellery was sick, I would get play the gig for him and pick up some much needed money. (and Bobby pays good:-) After Ellery left the band the opportunity to sit in with the band ended. nothing against Sam Salamone, who is also one of my heroes, but when Sam joined the band he was both the organ player and bass player AT THE SAME TIME! As they say a little bit above my pay grade:-)

Ellery was a great guy, and I know that he had a few problems with the drink years ago, but he also had a knack for straightening himself out. I know that the 6 years he was with the Blue Band were some of the best years I had playing music. Just hanging out with the band and talking music with Ellery and the rest of the band was a great learning experience for me. I will miss you my friend. God Bless!

Unfortuntalty I haven't found a photo of Ellery. There is at least one picture of Ellery with the blue band on their website but nothing of him alone. If anyone has a photo please email it to me.
Posted by Blues Historian at 7:40 PM

Hope you got the email I sent with an old picture of Ellery from back in the 70's.
Cyndi